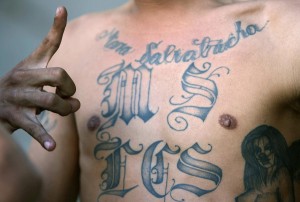 Courtesy of: The Washington Post The “devil’s head” hand sign is used by members of MS-13, or Mara Salvatrucha, to identify their affiliation with the gang.

The untimely death of Kevin Alvarez was not the first in Alexandria to be blamed on gang violence. Alvarez, age 17, was killed in a drive-by shooting on January 29, 1990 as he was entering his apartment building on Trent Court in Alexandria.[1] Described by friends and family as a good kid who volunteered to help a clerk at Francis C. Hammond Junior High when he was younger, Alvarez supposedly got involved with the wrong crowd who called themselves “la mara de Chirilagua.”[2] Police say they were not a violent group but simply hung out together and protected one another.[3] It’s hard to see how somebody who was “a best friend to anyone” ended up being the one of the best street fighters and a rival to “la mara de Washington.”[4]

Alvarez was one of the thousands of young boys who came to the Washington, DC area, particularly Arlandria, in the 1980s with their families to escape the Salvadoran Civil War. As Salvadoran immigrants, these boys and their families were denied the status of “refugee” by the federal government, thus denying them access to federal aid and resources. The lack of resources left Salvadoran families, like the Alvarez’s, feeling they only had themselves and other Salvadorans to rely on as they struggled to get by. The feeling of being outsiders or “not good enough” added with normal teenage development lelt numerous Salvadoran youths vulnerable to either form a “mara” or be recruited to gangs such as MS-13 (aka Mara Salvatrucha) or youth gangs like Los Bravos or Little Latin Homies. While MS-13 may not have been in the DC area until 1993, gang violence was still very much present especially among Salvadoran and other Latino youths.[5] Alvarez’s group’s rivalry with the more violent “la mara de Washington” due to turf wars, girls, and street fighting lead to the unfortunate death of a boy who had his whole life ahead of him, but his death would not be the first or last Alexandria and more specifically Arlandria death blamed on gang violence.

The arrival of MS-13 brought more violence and death to the area as young Salvadoran youths were recruited into the business for the money, protection, and pride that the United States refused them with the denial of ‘refugee’ status. As older Salvadoran teens and young men were initiated into the group through a process called “jumped in,” younger Salvadoran children similarly formed their own gangs or maras. The initiation, “jumped in,” furthered the violent tendencies of members with new recruits only joining after being beaten for 13 seconds by MS-13 members.[6] Boys, younger than Kevin Alvarez, were caught up in the life of brotherhood, protection, and dignity that such groups offered. The devastating effects of gang rivalries was made clear in 1996 outside of a George Washington Middle School in Alexandria when a fight  left 16 year old Romulo Eric Ardila dead with witnesses claiming none of those involved looked older than 16.[7] For young boys like Alvarez and Ardila, gangs meant friends, safety, and money because they knew that as members they would be protected.

“La mara de Chirilagua” and other youth gangs were not built on the premise of violence, but MS-13 was. Formed in Los Angeles in 1980s by Salvadoran immigrants, MS-13 quickly spread across cities in the United States with the local ‘clique’ forming in Alexandria in 1993.[8] The gang’s focus on violence within their gang and the killing of rival gang members created a dangerous atmosphere in Alexandria. Consequences of violating the gang’s rules include a “calenton”- a 13 second beating- or a “green light”- death.[9] The only punishment for cooperating with police was a “green light;” this punishment meant that MS-13 members and community residents were made to fear talking to the police about gang activity.[10] The deportation of gang members back to El Salvador, which was overrun with gangs, did not help matters in El Salvador or Alexandria. When the Salvadoran government created tougher anti-gang laws that advocated strict sentences for gang members caused members to flee to the US prompted an endless cycle of gang violence in Alexandria and El Salvador.[11] Unfortunately, MS-13 and rival gangs are still active in the DC/ Alexandria area with several gruesome murders and other crimes being linked to the organizations, particularly MS-13.