The building of the Potomac Yards in Alexandria, Virginia required many unskilled and semiskilled laborers during its construction in the early 1900s. 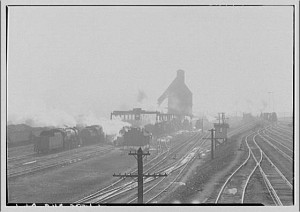 Railroad contractors employed many Italian laborers to build railroads and make track improvements.    Railroad work, however, was not a safe or easy job, and many Italians were injured or killed.  Newspapers, such as The Washington Post, The Evening Star, and The Alexandria Gazette, documented many railroad accidents involving Italians in the early 1900s.  On December 18, 1903 The Evening Star reported the death of twenty-two year old Lorenzo Basque, an Italian laborer who was struck by one of the work engines at the rail yards. The Evening Star also reported that Basque was escorted with twelve fellow Italian laborers to the Alexandria Hospital “who were employed with him in the construction of the double track of the Richmond, Fredericksburg and Potomac Railroad, about fifteen miles below the city.”1  Despite the large group that followed him to the hospital, little is known about where Basque lived, and if he had any family in the area.

The Alexandria Gazette reported the death of Antonio Taroborrelli, another Italian railroad laborer, on March 23, 1905. According to the article, Taroborrelli was struck in the head by one of the small cars and his “neck was broken and the back of his head crushed.”2 The article also mentions that this was the second death that week from railroad accidents.

The two incidents above are not the only railroad related accidents, injuries, or deaths among Italians in the early 1900s in and around Alexandria.  The Alexandria Gazette reported an Italian laborer employed by Reiter, Curtiss & Hill was “struck in the head by an engine” on April 6, 1906.3 Another incident occurred a month later with an Italian laborer’s foot being seriously smashed while working on the railroad.4

Despite the well-documented hazardous working conditions on the railroad, many Italians migrated to the area looking for work.  Perhaps the potential monetary benefits outweighed the risk; it also could be that there were few job opportunities for Italians. Railroad construction and maintenance required large amounts of labor that many migrating Italians took advantage of.