In 1924, one legislative action defined the new political and social attitudes toward southern and eastern European immigrants entering the United States. The National Origins Quota Act, also known as the Johnson-Reed Act, was designed to restrict what some native-born whites believed to be undesirable populations who were entering the country at the time. In effect, it’s “most basic purpose…was to preserve the ideal of American homogeneity.”In other words, it encouraged western and northern European immigration and restricted all other groups through the creation of a quota system based on 2% of the 1890 U.S. Census.  All Asian were banned.1

White public opinion and tolerance for the law in Virginia can be ascertained by looking at local newspaper articles. One such article can be found in the Washington Post in 1927. On September 8, the Washington Post reported on an Italian man named Antonio Vacara, a shoemaker, who was arrested for “acting in a suspicious manner.”  Local authorities thought he was insane, believing that he was suffering from hallucinations for refusing to eat out of a fear of being poisoned.  A day later, the Post reported that Dr. J. S. DeJarnette, the superintendent of Western State Hospital, a psychiatric facility in Staunton, Virginia, said that he would reject Vacara because he thought he was a foreigner and recommended that he be deported.  De Jarnette was also a supporter of eugenics, the idea that white elites needed to limit the reproduction of certain groups of humans whom they deemed inferior, including certain immigrants groups.  The Virginia state legislature had also passed the Virginia Sterilization Act, also in 1924, to allow the state to forcible sterilize men and women against their will, which DeJarnette supported. In 1927, DeJarnette was a key witness for the state in the case, Buck v. Bell, which upheld the constitutionality of such laws. 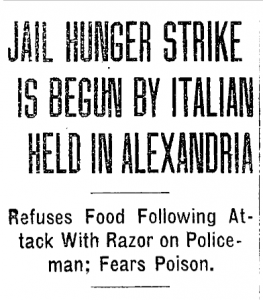 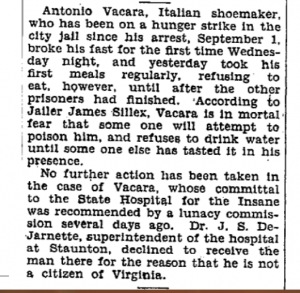 Whether insane or not, Vacara faced two-fold discrimination when he was arrested for “acting in a suspicious manner.” He was not only possibly mentally ill, but also an Italian immigrant. The overwhelming public opinion of the time was unfavorable towards men and women like Vacara. Madison Grant’s words are key to understanding white public opinion of the time. In The Passing of the Great Race, Grant proclaims that even under the best conditions, a “race” can only “achieve its maximum development, but the limits of that development are fixed for it by heredity and not by environment”.2   Like Grant, many white Americans believed that non-whites and even non-western European peoples could never become fully American. Grant’s book, which was written in 1916, concluded that mixing whites and non-whites together diluted the gene pool, creating humans that are more primitive than their pure blooded Western European ancestors.

Several days later, on September 13, the Post reported that Vacara had been “adjudged insane by a lunacy commission” and transferred to the State Hospital at Staunton.3 It is unclear what might have changed DeJarnette’s opinion on Vacara’s admittance.

2 Madison Grant, The Passing of the Great Race, Or, The Racial Basis of European History (New York: Charles Scribner’s Sons, 1916), 13.