After the passage of the Chinese Exclusion Act of 1882, it was almost impossible for Chinese immigrant laborers to gain legal access to the United States. However, with the destruction of the Immigration Bureau’s offices in 1906 after the San Francisco earthquake and subsequent fires, Chinese immigrants suddenly could create or buy false documents and claim native birth. The influx of Chinese immigrants with falsified documents is known as paper sons, because it was usually young Chinese males entering the US pretending to be the son of a citizen. After the introduction of paper sons, the Immigration Bureau began cracking down on incoming Chinese who claimed to be children of American citizens in an attempt to combat this form of illegal immigration.

Record Group 85 (RG85) contains information compiled by the Immigration Bureau (later known as the Immigration and Naturalization Service or INS) from 1891 to 2003. Though the contents extend beyond the exclusion of Chinese immigrants, a large portion focuses on them. Through examining the contents of these case files, we can find an extraordinary amount of immigration on the Chinese American community, including paper sons. One such file is that of Moy Hong Tow.  Moy, an eleven year old boy who immigrated to the US in 1937, was suspected of being a paper son, but was eventually cleared and presented a Certificate of Identification, signifying his legal admittance. Through analyzing Moy’s case file, we find that immigration officials suspected that he was a paper son.  The documents that their investigation produced also have become a treasure trove of information on Chinese immigration and particularly the Moy family.

At first glance, two major indicators of a paper son are apparent in the file: the first is that Moy Hong Tow was an 11 year old boy from China (see picture below) arriving in the United States alone and claiming admission under a native born father, Moy Sing, who was deceased. The claim of a deceased, but American, father was not uncommon in cases of paper sons. The second issue was that Moy already had three alleged brothers residing in the United States, all of whom had immigrated between 1933 and 1935. The quick succession of these brothers coming could be an indication that someone in China was selling Moy Sing’s papers, and the “brothers” were unrelated.

These initial red flags meant that the questioning portion of the case would be essential in detecting the legitimacy of Moy Hong Tow’s claim. Those questioned included Moy Hong Tow and two of his elder brothers Moy Hong Oong (Dong) age 18 and Moy Hong Ham age 14 of Alexandria, Virginia.1 According to Moy Hong Dong’s testimony, his younger brother was arriving from Hong Kong to take up residence with him and Moy Hong Ham at the Bok Hop restaurant in Alexandria, Virginia. As demonstrated from the Moy Hong Tow file, the questions asked were extremely specific, demonstrating the immigration officials’ determination to uncover a possible paper son. For instance, each Moy received a common set of questions that had to do with the village that they had lived in prior to immigrating to the United States. While these questions did involve simple questions related to the names of residents and certain buildings in their village, they also included very specific questions, such as exact details of those who lived nearby.2 It is easy to see how these questions could result in more red flags and the discovery of a paper son trail; however, as the images below demonstrate, the Moys were able to answer these questions with limited discrepancies. 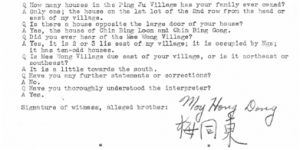 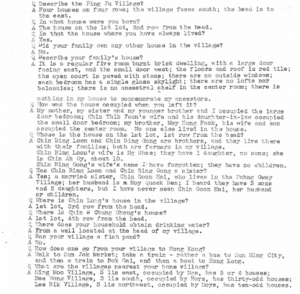 What is extremely impressive about the Moys’ answers, besides the conflicting information on families who occupied Mee Wong Village, they were almost completely in synch. Throughout the interview, Moy Hong Tow was able to answer all questions asked of him, despite the fact that he was 11 years old. While it can be argued that in a paper son’s case he could have been provided the information in advance to prepare for the interview, the amount of information that he recalled and that matched his brothers’ testimonies affirmed in the eyes of inspectors that Moy Hong Tow was Moy Sing’s son. On December 11, 1937, documentation was submitted for the approval of Moy Hong Tow’s admittance at Ellis Island as a United States citizen. 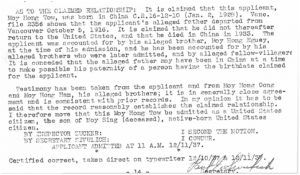 In March 1938, Moy Hong Tow was presented his Certificate of Identity. Whether or not Moy Hong Tow was actually a paper son, we do not know. However, from reviewing his case file we learn quite a bit about the process for those deemed suspicious. From the first concerns regarding Moy’s claim to citizenship to the questions asked and answered in the testimony for entry, it is obvious that immigration officials were committed to finding paper sons. Due to the Moy’s detailed and accurate testimony during questioning, immigration officials were not able to reasonably deny Moy entry.  And given the files end after 1938, it can also be assumed that there were no further inquiries into Moy Hong Tow’s legitimacy following the issuance of his Certificate of Identity. Whether or not Moy Hong Tow was a paper son of not, he had made it to the United States to live with his elder brothers in Alexandria, Virginia.

1 Another brother, Moy Hong Nguey, was mentioned as the person paying for Moy Hong Tow’s journey to the United States; however, he was not interviewed. His responsibility was only to pay for Moy’s trip, while Moy Hong Dong and Moy Hong Ham were to house him upon arrival in Alexandria, Virginia.