Among the mundane data found in the U.S. Census, there are bits of information that are too intriguing for a historian to pass up. That was the case when I found Frederick and Rose Vaccari listed in the 1850 U.S. Census for Alexandria, Virginia.[1] Frederick, who was born in Tuscany, was listed as a “mariner” worth $2,000. Rose, who was four-years older than Frederick, had emigrated from Ireland. Although it is not uncommon for Italian and Irish immigrants to intermarry, finding such a couple in antebellum Alexandria seemed unique.

Based on scant online records, Frederick was a local shipmaster, living in Alexandria by 1830 at present-day 115 Prince Street (then known as 25 Prince Street) on Captain’s Row. In 1833, he was listed as manumitting Ann Berry, a slave whom he had bought from Henry Chatham.[2] That same year, Ann gave birth to a child, Mary Catherine, who was named after one of Vaccari’s daughters. Mary Catherine was supposed to be freed like her mother based on conditions set by a previous owner; however, Mary Catherine was sold to James S. Simpson, an agent for a slave trader. For more information on what happened to Mary Catherine, see the Library of Virginia’s Out of the Box Blog.[3]

Upon further sleuthing, I also discovered the obituary for Rose on July 9, 1886 in the Washington Post (see below) and the headstones for both Frederick and Rose at Saint Mary’s Catholic Church Cemetery in Alexandria.[4] Rose was originally from Belfast, Ireland, and though from the north, she was Catholic.   After her husband’s death in 1858, Rose became a grocer, increasing her family’s property value to $4,120 by 1860. During the Civil War, she remained in Alexandria working as a “merchant” and signing the Oath of Allegiance to the Union. Her brother, Hugh Latham, became mayor after the Civil War from 1866-1868 and then 1869-1872 (he was replaced briefly from 1868-1869 by the military.[5] The Vaccari and Latham families—while Catholic immigrants—were accepted members of Alexandria’s white elite by the mid-nineteenth century. 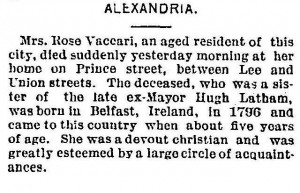 By the 1870 and 1880 U.S. Censuses, Rose had retired from running her store. In 1870, she was still head of her household, although her occupation was “keeping house.” Her property was worth $4,700. Ten years later, she was living with her nephew, R. M. Latham, who married her grand daughter, also named Rose in 1867.[6] He worked as a jeweler and lived on King Street with his family.

Rose died on July 8, 1886 at the age of ninety. In her will, which was contested among her relatives, she divided her property between her two daughters.[7]

No doubt, there is more to the Vaccari story yet to be uncovered!!!